I have a sneaking suspicion my 11-week-old is insensitive to milk protein (that she gets through breastfeeding), so I’m cutting out all dairy for two weeks to see if it makes a difference.  I’m pretty sad about giving up yogurt, but the biggest challenge is going to be cooking without cheese.  I cook a LOT of things with cheese. 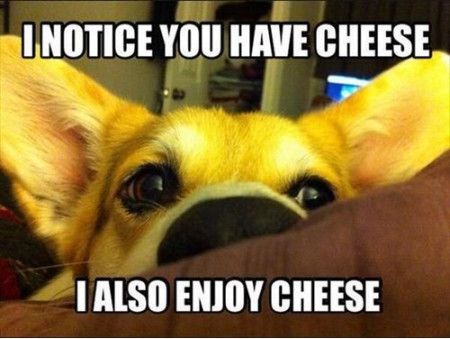 Last night, I made a deep-dish taco pizza.  As I grated the cheese that would be sprinkled all over the top of the pizza, I kept reaching to pinch some shreds of cheese between my fingers and eat it.  It’s usually my reward for grating cheese because I HATE grating cheese.  But of course, I had to continually slap my hand and tell myself that cheese is currently off-limits.

I scattered the cheese all over half of the pizza, because only my husband would get to eat that part.  When the pizza came out of the oven he looked at it, perplexed, and said, “How can you eat a taco pizza without any cheese?”

I should have slapped him.

(Don’t worry, there isn’t actually any husband-slapping occurring in this house.)

So, one dinner down, 13 to go.  I will be scouring Pinterest and my recipe-books for dairy-free recipes, and I will be avoiding anything that involves cheese so I’m not being teased like I was last night.  Sorry, B, if I’m going cheese-free, so are you.

Any favorite dairy-free recipes you can recommend?

I made a mess of every utensil, bowl, appliance, and counter in my kitchen, but I did it.  I made homemade whole wheat pizza dough.  The result was an unbelievably tasty pizza:

Every homemade pizza I’ve ever made has been the product of a box of Jiffy pizza crust mix.  Even then, pizza crust inevitably sends me into fits of cuss words and a series of vows to never again make a homemade pizza.  But just like swearing to give up alcohol following a night of heavy drinking, as soon as my frustration hangover wears off I’m back to purchasing another box of Jiffy and trying again.

My battle with pizza dough has always been a case of the stupid stuff not spreading.  No matter how meticulously I slowwwwwwly pad at the dough to spread it far enough to deem it pizza-worthy, it always tears, retracts, and fights like hell to remain a ball of useless dough.  I had hoped that making my own pizza dough would resolve this issue.

The recipe for the dough was almost identical to that of the dinner rolls I made last week–the only difference being that the pizza dough didn’t call for butter and sugar like the rolls did.  I also chose to swap half the all-purpose flour for whole wheat flour.  I’m not sure if this is the reason that the pizza dough was a bitch to knead, but no matter how floured the board was, the dough kept sticking to it!  This hadn’t been a problem at all with the roll dough.  I think cussing and homemade pizza go hand in hand–there’s just no getting around it.  Eventually, the dough reached the elasticity I was aiming for and I began sculpting the crust.  Guess what?  It was at least fifty-seven times easier to spread than the boxed dough!

In addition to the homemade crust, I also made some homemade pizza sauce.  I mixed six ounces of tomato paste with six ounces of water.  Our darling little old Mexican neighbor has kindly provided us with a stash of homegrown garlic, so I minced up a couple of cloves for the sauce.  [Fact:  this was the first time I’ve ever used fresh garlic, as opposed to bottled.)  After adding some basil and oregano, the pizza sauce was perfect!

Next, I smothered the crust with sauce, sprinkled it with a mix of grated Gruyere and mozzarella, and topped it with some roma tomato slices.

But I didn’t stop there.  On top of the tomatoes, I added pepperoni, fresh spinach, and a couple pinches of grated Romano and Parmesan. 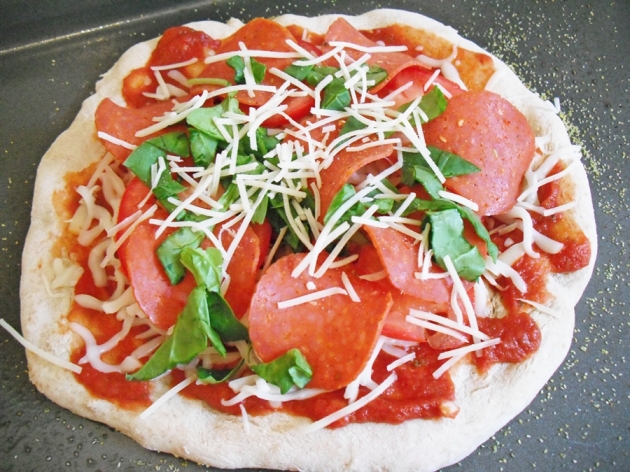 When it came out of the oven, it was hard to believe I’d made it.  My homemade pizza never looks this good!  And it tasted good, too.  The texture of the crust was splendid.

I have to admit, I was slightly annoyed that so much effort was required for a simple pizza crust.  If you take the prep work and the cleanup time into consideration, I probably spent an hour on the crust alone.  But my annoyance faded when I remembered that this recipe was for multiple batches of dough, so the next time I want a homemade pizza, all I have to do is remove the dough from the freezer and thaw it out!  😀

So now I’m off to empty my dishwasher.  That’s right, I filled that sucker up making a 7-inch pizza!

My fiance’s poor 8-year-old son has been a victim of some of my recent (bad) cooking adventures, so tonight I aimed for something a little more “kid-friendly.”  I decided to make these Pepperoni Pizza Rolls.

I’ll admit up front that spreading dough is an area in which I very badly need to improve.  This recipe doesn’t instruct you to “spread” dough, but it requires a fair amount of flattening biscuit dough.  I planned to make 15 pizza rolls tonight, so I gave myself plenty of prep time in anticipation that I would spend a minute or twenty fighting with the dough.

I recently gave birth to this idea that if I film myself doing some of the things I suck at, maybe I can use the videos as an opportunity to tweak or improve my technique.  So tonight, I set up my camera and filmed Pizza Roll Attempt #1–this first attempt took almost two minutes.

From Pizza Roll Attempt #1, I learned that I didn’t flatten the dough enough and that I piled on too much cheese.  As a result, when I tried to close up the pizza roll, I had a little mini-battle.  I got a little better with each one, and around Pizza Roll Attempt #10, I had cut in half the total time to complete each roll.

I didn’t necessarily learn anything from watching these two videos, but it was kind of neat to see the transformation of my abilities after I’d had a little practice.  Corny as it sounds, it was symbolic of my cooking journey as a whole.

A proud moment emerged when my fiance’s son entered the kitchen and, after observing me for a minute, asked if he could help me make some pizza rolls.  I was slightly unnerved at first; after all, I’m about the LEAST qualified person to teach a child how to cook anything!  But I walked him through a pizza roll, step-by-step, and he did wonderfully.  So we finished them up together and let me tell you, we ROCKED! 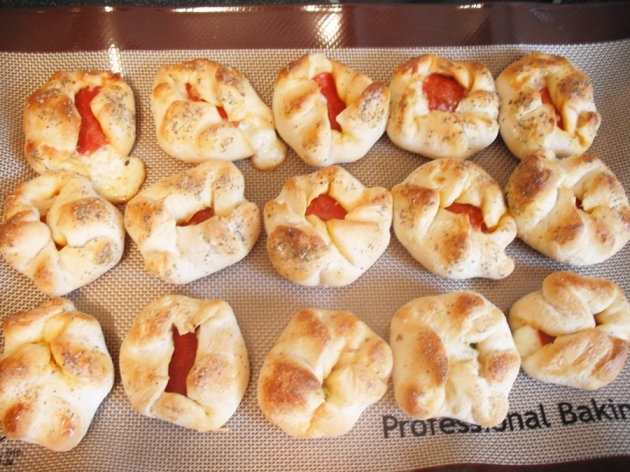 Since these pizza rolls were so simple, I was brave enough to experiment a little with the ingredients.  Since my fiance and his son don’t care for Gorgonzola (as I recently learned the hard way), I filled some of my pizza rolls with Gorgonzola, spinach, Parmesan, and pepperoni.  Delicious!