For the past couple of nights, I haven’t really planned ahead for dinner.  Five months ago, this would have resulted in a trip to Subway or to the grocery store for a DiGiorno.  But I was wearing my bravery boots, so I attempted–for two nights in a row–to make up my own meals.

Last night, I made what my fiance has dubbed the “open-faced omelet.”  Against my better judgment, I started by peeling and dicing two russet potatoes.  I say it like that because, as many of you already know, potatoes are my sworn enemy.  Those uncooperative little bastards never do what I want them to do, so I usually avoid them altogether whenever possible.  Since one of my goals in the kitchen is to never give up, I dumped the diced potatoes in a heated, oiled skillet and crossed my fingers.

It took about 20 minutes, but the potatoes finally turned soft on the inside and browned on the outside.  I was absolutely ecstatic that they didn’t turn to mush like they typically do!  Once they reached a beautiful brownness, I added chopped onion, chopped garlic, and about 10 ounces of sliced turkey kielbasa.  In a bowl, I whisked together some milk and eggs and poured the mixture into the pan, letting the eggs scramble among the rest of the ingredients.  Once the egg had cooked, I topped it all with some Parmesan and Romano.  Mmmmmm, it was delicious. 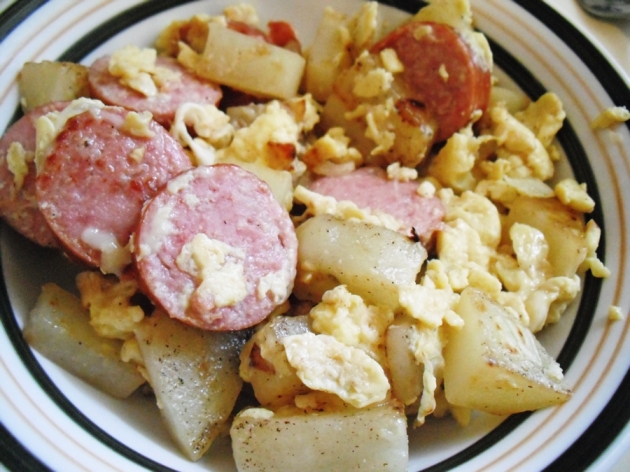 Tonight, I was in the mood for chili.  Since chili is something I have yet to fail at, I thought I’d try my hand at making chili without a recipe.  It turned out so good that I’ll even share what I did!  It’s SUPER easy, but nice and flavorful.  Even my test subject (fiance) approved.

1)  Add ground beef, onion, garlic, and green pepper to a large pot.  Cook over medium heat until beef is browned. 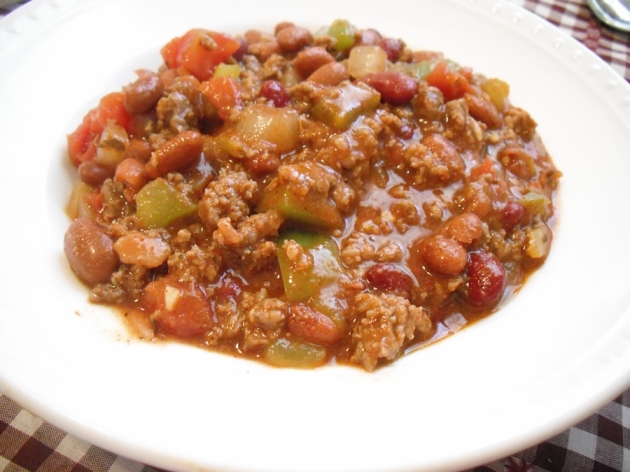 I’m feeling really proud of myself.  Five months ago, I couldn’t even chop an onion.  Now I’m making up my own recipes and–gasp–sharing them with others!  That’s a LOT of progress made in just a matter of months.  GO ME!